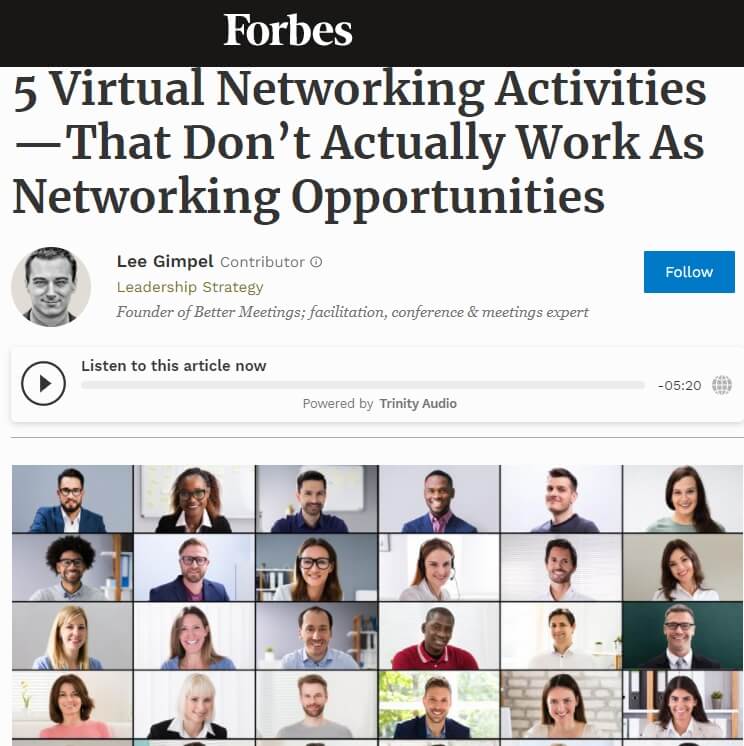 Networking was perhaps never as strong as it could have been, even at in-person conferences. However, good networking at virtual conferences is even more difficult and uncommon.

As with in-person meetings, there are many sessions and activities advertised as virtual networking opportunities today. Unfortunately, they aren’t actually effective networking.

Here are some common culprits that online conferences label as networking opportunities, but which don’t deliver on that promise:

Entertainment Is Not Online Networking

Online sessions that are primarily meant to entertain are perhaps the biggest offender when it comes to networking at virtual conferences. This entertainment may take different forms, but here we might see cooking demonstrations, comedians, magicians, or musical acts. There are also a whole range of online tastings that have fallen into this category: beer tastings, wine tastings, cheese tastings, coffee tastings. It’s a bit different if people have received a box of cheese and it is a small group simultaneously talking, tasting and virtually networking; but often it’s simply an expert on screen lecturing an audience. Other virtual networking opportunities that typically come up short involve exercise, such as stretching or yoga.

It is totally fine to have entertainment that’s part of a meeting agenda or a conference schedule. However, don’t confuse simply watching someone do something with real online networking activities where people truly engage with each other.

Whether it’s in person or online, a lot of the time that events advertise as networking is really just downtime. There’s nothing actively happening. No one is facilitating networking. It’s just basically a waiting room. So if a session starts at 2 p.m. and you show up at 1:50 p.m., you supposedly have 10 minutes to network. Do people meet and connect in this time? Sure, some do. But a lot of that time is people answering emails, staring at their phones or awkwardly waiting for something to happen. That’s true when people are in the same physical room and doubly true when it’s supposedly online networking on Zoom or the like. You can certainly schedule virtual networking before or after other sessions, but it’s important to deliver on the promise. Just opening up an online session early and thinking attendees will hop to networking is usually overly optimistic and, thus, unrealistic.

Big Groups Do Not Turn Into Virtual Networking

Similarly, a peculiar result of online networking events is finding a room with dozens of people in it, all invited to talk at will. If a handful of people in the group know each other and are confident talking across a crowded room, this can look like a dynamic conversation. But the reality is that we don’t see a clump of 20 or 30 people trying to have a single, massive conversation at events. That’s just not the way that participants engage with other people and build meaningful connections. In a way, this almost falls into the category of entertainment—or just another panel discussion. If most of the attendees at the meeting are passively watching, it’s probably not a good recipe for people to get to know one another and feel that they’re connected. To improve networking at virtual events, think about breaking down big groups into smaller, more manageable pods of perhaps four people.

A Chat Box Is No Substitute For Real Online Networking

A chat box might be a decent way for people to communicate quickly or surreptitiously during online meetings, but it’s very rarely going to be how people network and build real connections with each other. Still, lots of meetings seem to view having a chat window as a stand-in for networking at virtual events. It’s not the same. Yes, you may get some sense for who’s in the room and you may have some interaction. But, the best case is that it’s the first step to a real conversation. And if there’s a call for people to drop in their LinkedIn profiles into the chat, that nets lots of largely unknown people in one’s address book rather than truly getting to know them; list-building is not the same as networking. A chat box can be a really valuable, functional part of an online meeting and can allow for great interactions. But it shouldn’t be the main method for real, effective networking at virtual conferences.

An Attendee List Alone Does Not Spark Online Networking

Some online events provide a list of attendees in the hope that they will connect with each other. Online events may make this available as a directory within the meeting platform; one can search for someone or browse the full list. Having this list theoretically induces one to find people with whom to connect and engage in some do-it-yourself networking through internal messaging as well as built-in videoconferencing. This is, in essence, akin to the olden days when you got a phone book delivered—and then someone would tell you that paging through it counts as networking. Making a list of attendees available might be a first step to networking at virtual events, but often the list is too big, too vague and too overwhelming for people to spend the necessary time reaching out to strangers. As a result, no networking actually happens; indeed, people are frequently too busy participating in the meeting itself to spin their wheels searching, sending messages and scheduling virtual coffees. It’s nice to have a list of attendees, but providing that shouldn’t count as online networking.

So much of the value of meetings comes from the ability to connect with one’s peers and colleagues. If it’s not the entire reason for bringing people together, it’s usually a big driver. Thus, delivering real networking opportunities provides value to the participants and increases the overall value of the event—online or in-person. To purport to offer networking that falls short diminishes both the value that attendees get individually as well as the larger impact of the event.

This article was originally published in Forbes.

5 Ways To Help Prepare Remote Presenters With The SAFER Checklist

How To Stop The Bait And Switch Of Online Engagement