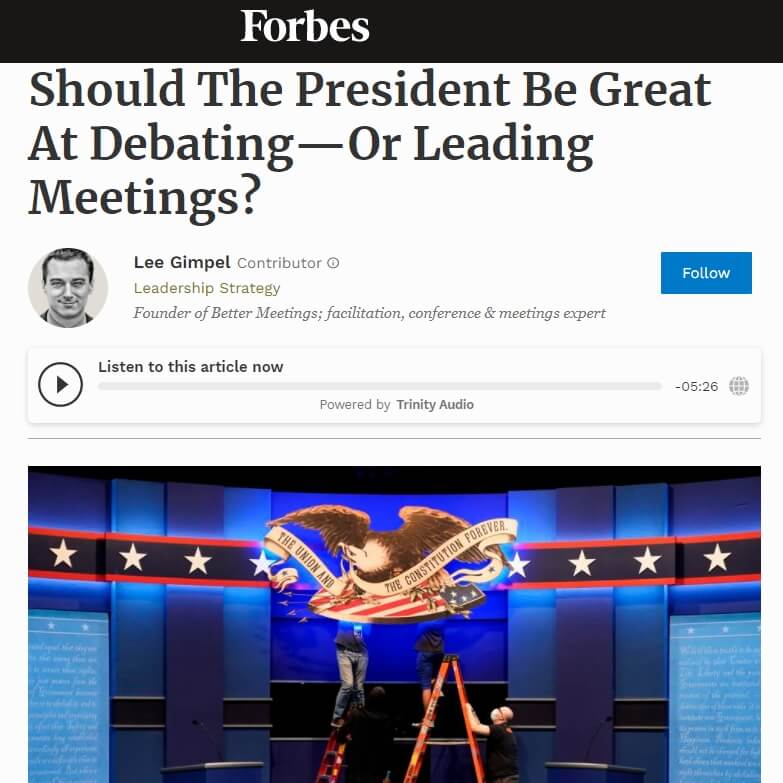 Why are there presidential debates? Is there not a better way to assess candidates?

The United States has been holding presidential debates for decades; it’s part of the fabric of the modern, television-friendly election process. But perhaps it’s worth asking whether something that dates to the faceoff between John F. Kennedy and Richard Nixon should be continued or whether it might be time for a change?

There are certainly numerous complaints and critiques about the debates. Writing recently in the New York Times, Elizabeth Drew made a plea to “scrap the presidential debates,” arguing that “they’ve become unrevealing quip fests.”

Indeed, for as much as debates are won or lost, this public perception may result from a catchy sound bite or, like Kennedy, a television-friendly image. That the leader of the free world can deploy a biting riposte may be entertaining, but it’s not really in the job description for the nation’s chief executive.

It’s no small matter that debates mostly fail to demonstrate the skills that an executive uses every day. A president will take questions and needs to think quickly during a press conference, but that’s hardly a proper debate. And when the president annually appears in the House of Representatives, it’s not to debate a pending bill, but is instead to give a prepared speech. Nor do world leaders settle disputes by sparring at podiums and landing rhetorical blows. Debates—at least in their election form—are part of the trial by fire that may lead to the Oval Office, but those skills don’t have much to do with the work that actually happens there.

“It’s difficult to argue they prepare someone to serve as president, since the format relies on a series of prepared questions. Ironically, we rely on a script when evaluating contenders for the world’s most unscripted job,” says Jim Ronan, adjunct professor of political science at Villanova University.

If the US government’s top manager doesn’t simply appear at a lectern and put out foreign policy fires, plot the response to a global pandemic, or fix an ailing healthcare system, how does America’s chief executive do his or her job?

Be it a small startup or an enormous bureaucracy, management comes down to assembling the right team, working with them, delegating responsibility, synthesizing information, and deciding on a course of action. And doing it efficiently and effectively. Management is more about meetings than debates. Chief executives spend hours each week in meetings; on the other hand, very few CEOs’ calendars have debates penciled in.

One might assert that debates highlight a mastery of information and an ability to perform under pressure in the conference rooms where decisions are made. But if that’s what is being tested, why not actually televise a realistic example of presidential decision-making and managerial acumen? Why not show what’s likely to transpire—unedited—in the trenches of the Oval Office or in the Situation Room rather than talking about it on a glittering debate stage?

In place of presidential debates, the public might be better served by watching candidates in meetings.

“There is great value to witnessing how a president runs a meeting. The focus is upon whether he listens to contending advice and facts before reaching a decision, or even stating his own view,” says Joan Davison, professor of political science at Rollins College.

Of course, the natural pushback may be that people think of meetings as boring.

However, with high stakes and quality production, audiences may flock to what could otherwise seem dry and unwatchable. Poker went from a few people holding cards around a table to a televised spectacle; similarly, the idea that the NFL draft could attract millions of primetime viewers might have once seemed preposterous. And this twist on presidential debates presents a view into some of the most important meetings in the world.

Leadership development programs already do similar exercises, albeit for much smaller audiences. Training programs put executives in a room with one-way mirrors and cameras then turn up the managerial heat. How will they react to this scenario or that one? How will they manage their team? How do they handle stress? Do they delegate? Are they prepared? Do they hear all voices? Do they invite dissent? Do they come up with cogent action items?

Televising such scenarios at a presidential level is arguably more relevant than debates, but it also seems like compelling TV.

So how might it work to replace debates with a fresh format?

Rather than an evening spent weighing in on myriad foreign affairs topics, that time could be devoted to solving some simulated crisis: Iran has seized tankers in the Persian Gulf; North Korea is massing troops at the border; there’s a coup in Saudi Arabia. There are any number of possible scenarios that offer the public more insight into how a candidate thinks and acts than a canned two-minute answer.

Imagine simultaneous meetings in studios outfitted as a red room and a blue room. The scenario is revealed to each team. Then the audience sees how both candidates manage the egos and expertise around the table as the clock ticks down. Viewers can judge for themselves whether a candidate has a functional mastery of what presidential historian Doris Kearns Goodwin refers to as a team of rivals—or whether the room seems more like a melee.

“Advisors might hide from the president facts which might displease the president. Yet, these facts could be essential to consider in order for a sound decision to be reached. Presidents must be ready to hear the bad news,” says Davison.

Is televising a simulated Situation Room the way to choose a president? Perhaps not. But if leading an organization—be it a corporation or a government—largely revolves around the hours spent conferring with one’s advisors, it makes sense to assess a chief executive’s skills there.

After all, says Ronan, “A president spends far more time running meetings than standing at a podium debating the issues of the day.”

This article was originally published in Forbes.

Should We Do A Hybrid Meeting? Two Smart Questions To Ask

How To Not Use PowerPoint: Five Steps To Wean Your Organization From Soul-Sucking Slide Decks

What Are Online Events? Have You Actually Attended One?